Yeah…yeah…yeah. I haven’t written in a while. The last few weeks at work and the rollercoaster that is my personal life have caught me slipping. But like Sister said to Celie, from now on NOTHING BUT DEATH WILL KEEP ME FROM IT. Well death and a bad wi-fi connection.

Anyway I have been reading A LOT of books lately and I can’t wait to share. Remember I told you all that Mama K and I have a book club. Well here is Mama K’s selection, The Nickel Boys by Colson Whitehead. It was such an amazing read that I even suggested it to my 9 to 5 reading group. It was the kind of story that I needed to be a part of sharing.

Oh and before I forget, I want to pay it forward. Comment below and I will ship someone a copy of the book free. I only ask that you pass it along to someone else when you are done. 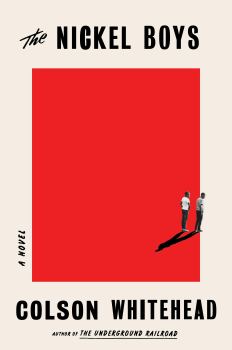 Loosely based on a true place in central Florida, a promising young black man named Elwood is sent to reform school for making the mistake of asking for a ride from a man with sticky fingers and a stolen car. Once there, the message became very clear and very sharp, some boys made it out and some boys didn’t.

This book struck me on so many emotional levels that I wasn’t ready for. To know that the place that inspired the book, The Arthur G. Dozier School for Boys, didn’t close its doors until 2011 was harrowing. The idea of these boys being relegated to gladiator style fights with Las Vegas style betting angered me. The arts and crafts displayed built with the slave (and I don’t use that term loosely) labor of these children saddened me. The fact that each boy knew that a slight infraction could lead them to physical and disfiguring abuse disgusted me.

But I read on.

I’m not sure if it was because it was located in an area not far from where my mother grew up that intrigued me. To know that a young man she might have known, or my uncle might have played with could have ended up there stuck with me. I cheered their small victories and I felt their too often resounding defeats. And when it all ended I felt deeply the harsh reality that there were other boys whose stories were not told.

Have you read the book? What did you think? Would you like to read the book– Comment below. Make sure your email is in the comment (no one will see it but me), so I can select someone to receive the book.